Rahul may or may not get anything, but his dress has told that he is twenty compared to Modi in terms of physical strength. The temperature has gone down by about four degrees in Delhi. The condition of every mango is bad due to winter. The weather has spoiled the condition of the good ones. Despite this, the pictures of Rahul Gandhi who came out to connect India through a huge and exhausting journey are enough to surprise people in winter. In a trouser and T-shirt when he was on a trip down south – people didn’t notice. Even on reaching Maharashtra. Even there people did not pay attention. Even when the dress was discussed, the reasons were different. Political attacks were made on him because of the expensive clothes he wears. Questioning the cost of clothes is absurd. People wear clothes according to their status. Well, except for a few places in comparison to the north, the effect of winter in the south is almost negligible. The situation is almost similar in Maharashtra as well.

But Rajasthan, Haryana and Delhi are included in those areas of North India which are notorious for bone-chilling cold. Despite this, Rahul’s dress did not change. Same trouser, same t-shirt. When he reached to pay homage to the former Prime Ministers, he was barefoot. Look at his pictures after reaching the colder regions of the north. Look at any picture. If you don’t believe then see the picture below. The effect of weather is visible on everyone except one Rahul Gandhi. This is nothing less than a miracle for the people. It is really a natural question that how is Rahul able to withstand bad weather in such clothes? 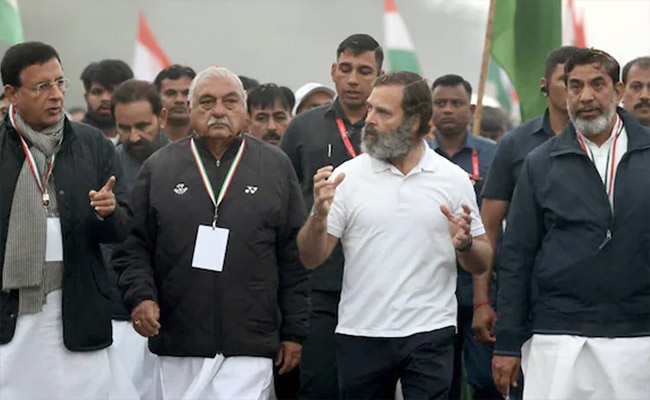 Rahul Gandhi in T-shirt, rest of the party leaders are in jackets.

People are also asking. Is Rahul so tough that winter has no effect on him? Some people are saying that maybe Rahul is walking. And they are seen moving very fast, because of this their body remains warm enough. If any normal person walks for a long time, then his body remains warm and he does not need clothes. The body remains warm during workout or while playing and even if the weather is winter, there is no need for clothes. Maybe because of this Rahul is able to bear the bad weather. But when we see other people walking with him in the photographs during the journey, they are also seen wearing clothes. Leaving aside the elders, even their peers or leaders younger than them are seen wearing clothes according to winter. Then it is understood that if walking was sufficient then why would other people prefer to sweat in warm clothes.

Some people are saying that everything is arranged in Rahul’s visit. Many AC containers are in travel. And Rahul keeps on walking a little day and night. When they are not running, they rest in these containers. Needless to say that there must be arrangements for blowers etc. for heating. In fact, a break has also been taken in Delhi to repair these containers before reaching the very cold areas of Jammu and Kashmir. Despite this, AC containers can also help only for a time. What does he mean for Rahul or any other worker while going on the yatra. Some people are even saying that due to genetic qualities, some people have more ability to tolerate cold. But in Rahul’s case, the logic of genetic merit will also not apply. Had there been a genetic quality, Rahul would have been seen in warm clothes in Delhi for the first time. He has always been seen in kurta-pajama and a black half-sleeve jacket over it in winters. In winter, this dress is her identity in a way. They look good in it too. But this winter, Rahul’s bana is holding a secret. For this, his physical ability can be praised. On the day when Rahul was seen barefoot, in half T-shirt and trousers, Narendra Modi was also seen around the same, who was seen in a sherwani with a closed neck.

Looking at both the pictures, Rahul seems to be stronger and stronger than Narendra Modi in terms of withstanding the weather. Only he can tell from where Rahul got this much ability. Whether or not anything is achieved by the yatra, Rahul has shown how much physical capacity he has. Now it remains to be seen whether there is any change in Rahul’s travel dress in the snowy areas of Kashmir. Rahul has defeated Modi ji at least on one front. What is the secret of Rahul’s power, only he can tell better.