Pawan Singh’s wife got trolled because of her dress, people commented Jyoti Singh, wife of Powerstar Pawan Singh, came into the limelight recently for divorcing her husband and making many serious allegations. Earlier, she used to stay in headlines because of her beauty and sharing a great bond with her husband. But due to the rift in her relationship with Pawan, now she often comes under the target of social media users. In such a situation, now she has once again come under the target of trolls. This time the reason is not their relationship but lifestyle and dress. People are lashing out at him and commenting fiercely in the comments box.

Actually, after Pawan Singh’s birthday, his wife Jyoti Singh (Jyoti Singh photos) also celebrated her birthday on 7th January. During this only his family and close people were there. Pawan Singh was not called in this. Even at that time people had told him lies. After this, Jyoti has now shared a photo of herself from this celebration, in which she can be seen showing off her glamorous looks in a black outfit. Her dress is not bold from anywhere. Now you must be thinking that when there is no boldness then why are netizens trolling her (Jyoti Singh Trolled for dress)? In such a situation, let us tell you that the reason for this is his lifestyle and not living with Pawan Singh. Yes, Jyoti shared the photo and wrote, ‘Black is not just a colour, it is a lifestyle’. People are telling him a lot of good and bad about this caption and his chilling lifestyle. 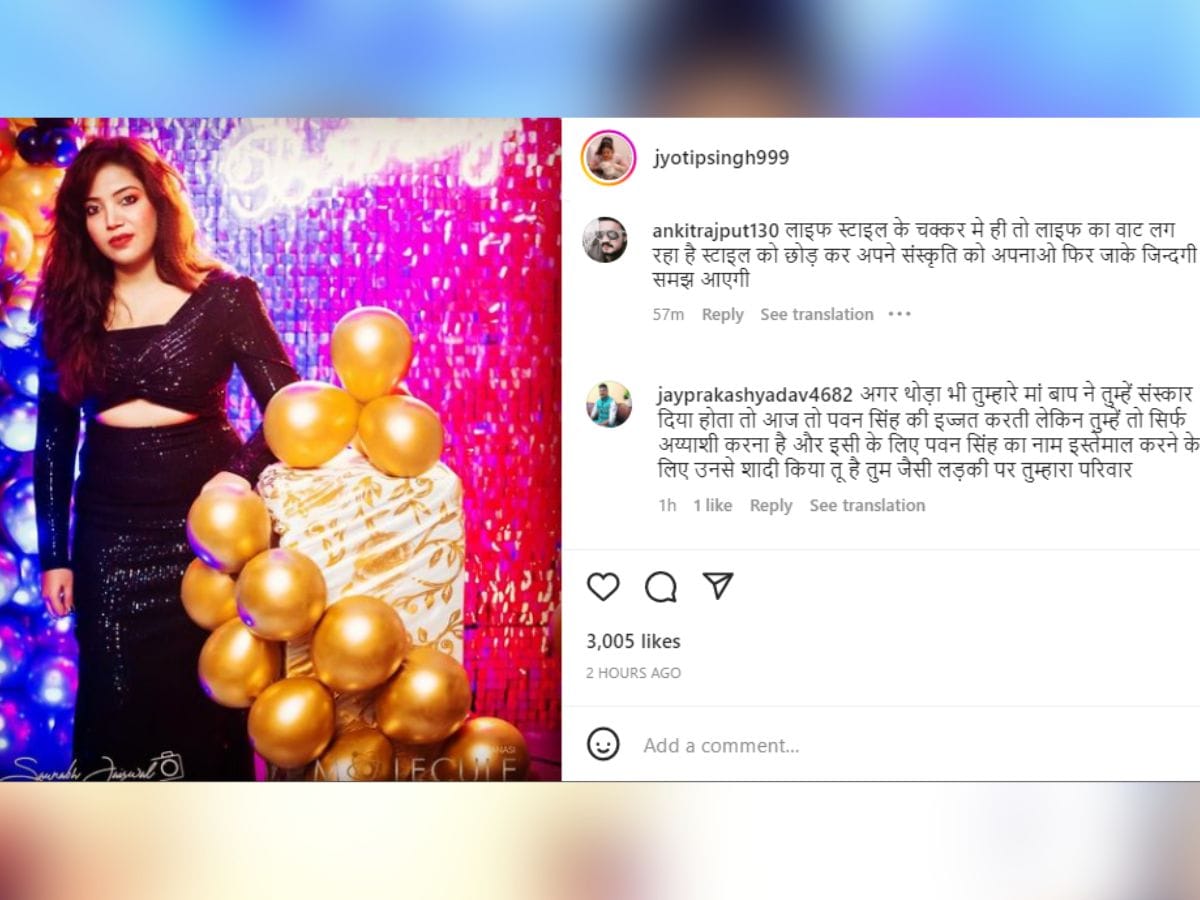 Now if we talk about the reactions of the users, then one wrote, ‘In the life style affair itself, life is going to wat, leave the style and adopt your culture, then you will understand life’. The other wrote, stating the debauchery, ‘If your parents had given you a little sanskar, then today you would have respected Pawan Singh, but you only want to do debauchery and for this reason you married him to use Pawan Singh’s name. Is there a girl like you but your family? The third wrote, ‘You don’t love Pawan Bhaiya. You love their money. Have some shame sister-in-law, this does not look good in Hinduism’. In the same way, people are telling him a lot of lies.

Not only this, some have even replied to the trolls towards Jyoti. Some fans of Jyoti Singh have been seen supporting her. One wrote, ‘Your brother’s wind is alive, he has not been hanged. She is understanding life only then she is living. Another wrote, ‘Hey brother, how can you judge someone’s character by someone’s dress, if your sister wears it, do you call her like that too.’ Similarly, people are commenting fiercely on his post and giving a befitting reply to the trolls.

The dispute between Pawan Singh and Jyoti Singh is not hidden from anyone. He had made serious allegations against the actor and his in-laws. In this, many serious allegations were made ranging from abortion to forcing for suicide. Along with this, he had also sought expenses from Pawan Singh for maintenance in the application filed in the court.