The green comet begins to be visible to the naked eye: when and how to locate it in the sky | Science Astronomers and fans are already capturing the comet, which will soon reach its closest point to Earth.

The impressive green comet, whose official name is C/2022 E3 (ZTF)has begun to be observed with the naked eye, according to the most recent reports. Until a few days ago, the space object was only captured by telescopes and binoculars; however, as it gets closer to Earth, its brightness has increased significantly.

It will be visible both in the northern hemisphere (Mexico, Spain, Venezuela, Colombia, etc.), as well as in Ecuador and the southern hemisphere (Peru, Bolivia, Argentina, Chile, etc.). Without a doubt, it is one of the most important astronomical events of 2023.

“Comet ZTF no longer requires a telescope to view,” NASA said in a description of a long-exposure photo taken on January 19, showing the object as a green star in the sky. 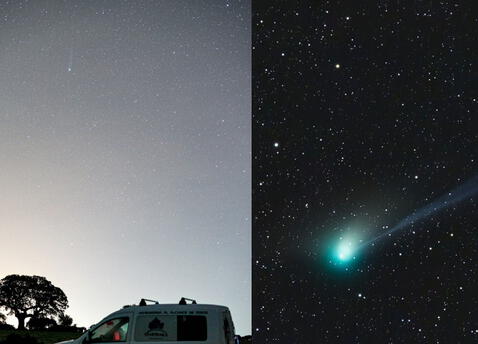 The comet is crossing our cosmic neighborhood for the first time in 50,000 years, so astronomers and space aficionados don’t want to miss the chance to witness its close pass.

What is a comet and why is this one green?

Comets are cold objects made up of frozen dust, rock and gases, orbiting in the far reaches of the solar system. However, they are sometimes drawn towards the Sun. When this happens, the heat from the star slowly begins to evaporate them, so they develop a cloud around them, called a coma, and a tail.

The color of its glow depends on the gases it contains. In the case of comet ZTF, its green glow occurs because its diatomic carbon absorbs ultraviolet radiation from the Sun.

The comet received the name of C/2022 E3 (ZTF) because it was discovered in March last year, with a telescope of the Zwicky Transient Facility (ZTF) astronomical project, in California, USA. At that time, it was crossing the Jupiter orbit.

The analysis of its trajectory indicates that it comes from the Oort cloud, a layer that surrounds the solar system, composed mainly of these icy bodies and located at such a distant distance that it will be reached by Voyager spacecraft only in 300 years.

Its extremely elongated orbit is the cause of its return after 50,000 years and that, possibly, after this ‘visit’ it will be lost forever in interstellar space. 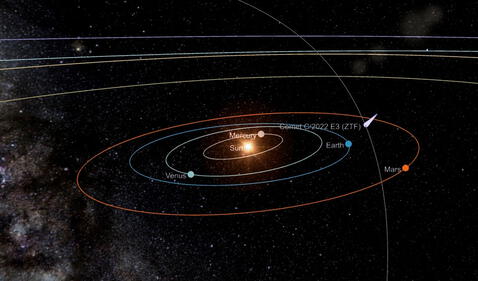 Location of comet C/2022 E3 at its closest approach to Earth. Image: Skylive

How bright will it be? How can we capture it?

Since it was detected, this green comet has increased in brightness considerably, so much so that astronomers estimated that, on these dates, it could be visible without the help of instruments. So far, they have not been wrong.

After its closest approach to the Sun, on January 12, the comet has continued to ‘ignite’ and approach Earth. Its closest step to our planet (perigee), will happen February 2, when it is located 42 million kilometers away. Therefore, the weeks around that date are expected to offer us the best visibility.

However, it can only be captured in dark skies. That is, clear, without light pollution or moonlight. The comet will appear as a diffuse smudge in the sky. Less experienced observers may need to use binoculars.

When will the green comet be seen? What time to observe?

While the ZTF comet is visible from now until mid-February. There will be two different periods to observe it.

Where to look to find the comet? Observation of the comet in the northern hemisphere, before dawn. Image: Royal Astronomical Observatory of Madrid 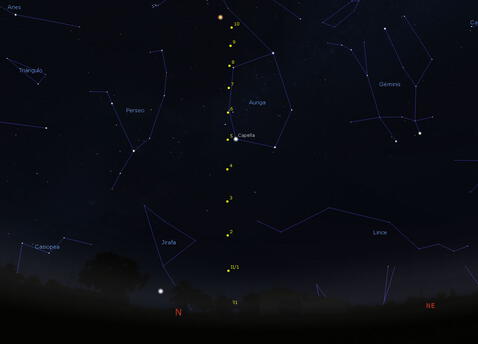 Observation of the comet from the southern hemisphere (as of February). Image: Stellarium